Since moving to Miami-Dade County, Florida from her native Puerto Rico in 1986, Luz has served on youth, education and health organizations' board of directors like Aspira of Florida, The Aspira National Association and World ORT.  Her volunteer work on behalf of her communities has been recognized numerous times, including a 2003 Outstanding Service Award by the Miami-Dade County Community Action Agency, a 2005 Relay for Life Founder Award by the American Cancer Society and a 2010 Pace Setter of the Year Award by the National Conference of Puerto Rican Women. Her business and political acumen has also been recognized with a 2006 “Up & Comer” award by The South Florida Business Journal, a 2009 and 2013 Hispanic Achievers Award by the Florida Joint Puerto Rican Chambers of Commerce, a 2011 Woman of the Year and 2012 Elected Official of the Year Award by the South Florida Hispanic Chamber of Commerce, the 2013 Elaine Gordon Award by Miami-Dade Days in Tallahassee, and in 2014 Hispanic Lifestyle Magazine named Luz a  "Latina of Influence."  Luz is proudest of her three biggest rewards: her now all-adult children!

Commissioner Luz Weinberg was first elected to the City of Aventura Commission on March 1st, 2005, taking 63% of the vote in a 3-way race, and becoming the youngest at 32 and the first Hispanic ever to serve the City’s council. Luz was re-elected unopposed in 2010 and served through terms limits November 2014.

On July 3, 2013, Florida Governor Rick Scott appointed Luz to the Miami-Dade Expressway Authority (MDX) where she chaired the Public Communications and Intergovernmental Committee, and was Vice Chair of the Budget & Finance Committee. On June 11, 2018, Governor Scott re-appointed Luz to MDX to a term ending April 2022. Luz also served as Vice President and board member of the National Association of Latino Elected and Appointed Officials (NALEO) from 2009 to 2015.

Luz is an engaging and energetic public speaker who's been featured on CNN, C-SPAN, Univision, NBC, MSNBC, USA Today, NPR and several others, on topics like the Census, the Latino Vote, broadband, transportation, the Port Miami Tunnel project and more. In 2013, Luz was one of only five witnesses invited to testify before the U.S. Senate Judiciary Committee Hearing, "Working Together to Restore the Protections of the Voting Rights Act" following the U.S. Supreme Court Shelby County v. Holder decision of that year.  Over four hundred of Luz's marketing and PR articles in English and Spanish, several opinion editorials and one book (The Port Miami Tunnel Project, Dec. 2015) have been published! Luz is currently working on her second book following the success of her Public Speaking training sessions: "Woke On Public Speaking."

Luz began her versatile career in 1993 as Case Manager for former City of Miami Beach Mayor, the late Forensic Psychologist Dr. Leonard Haber, who trained her in conducting psychological evaluations of high-profile criminal, family, juvenile, federal and civil court cases, as well as mock trials, jury selection and trial consultation cases until his retirement in 2004. She later freelanced as a writer for Community Newspapers, and served PR Director posts at Aventura Hospital, ATJC, GPR and NAG where she was promoted to VP of Operations in 2008.  In summer 2016, Luz served brief COO and CEO posts back at NAG (now CitiMED) but resigned to establish dual residency between Miami and Bogotá, Colombia due to her husband's temporary 3-year post at that U.S. Embassy. Prior to the move, she formed GlobComm, LLC, and has split her time between both countries lending her skills to various projects until their full-time return to the U.S. in 2019.

From 2010 to 2016, Luz served as Director of Communications for French global conglomerate Bouygues Construction's civil works and building divisions' inaugural USA projects: The $1B-USD  Port Miami Tunnel and the 9.1 acre Brickell City Centre in downtown Miami. For both of these very demanding, large-scale construction projects, Luz managed the day-to-day internal communications with the thousands of employees and hundreds of sub-contractors, as well as often contentious external communications and relations with the numerous project stakeholders, members of the public, government agencies and the media. She successfully managed project and corporate reputation at both projects, produced newsletters, over 100 project presentations, and several successful project milestones and team events!

Luz Weinberg is based in Miami, Florida-USA and Bogota, Colombia 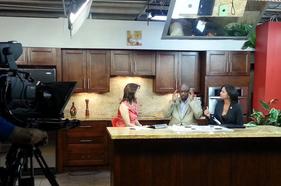 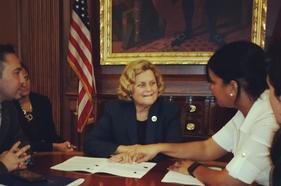 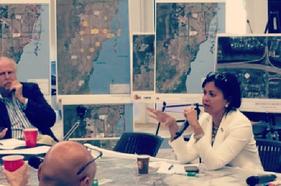